Being Real , Encouraging Others

Joshua 1:9 Have I not commanded you? Be strong and courageous. Do not be afraid; do not be discouraged, for the LORD your God will be with you wherever you go."

I know I haven’t updated but I haven’t had anything positive to say. I try to always keep my head up but it’s hard when there is so much going on.

We were told by my BMT doctor that everything regarding my biopsy was ok . So the relief of colon cancer had washed away. Well a week later Aaron and I went and saw the gastroenterologist and her news wasn’t bad but was not good either.

The small polyp was removed and had pre cancerous cells. This isn’t uncommon. It’s gone and nothing to worry about. However the large polyp is in a complicated location and was also pre cancer but had a few worrisome characteristics. The biopsy taken was very tiny and only on the surface. So there’s some concern about what’s underneath.

The talk was that due to it being complicated she couldn’t remove it. She gave a couple options and said I could see someone higher up who could possibly remove it or remove a section of my colon. There are risks with both. If removed through a colonoscopy the chance of recurrence is high and if it does come back the chance if it being cancer are even higher. Also if it ends up being cancer , I will have to have part of my colon removed anyways. Part of me thought, just take the section of colon out.

In the end after the other specialist looked at video and photo taken, he believes he can try and remove it. So May 2nd I have been booked in for a couple hours to try. If no cancer is found they will be monitoring me closely.

I have been very nauseous and fatigued again lately. Sometimes barely getting out of bed . I do have good days occasionally and I am always thankful for that. I struggle with the unknown and do fear the worse based on how I have been feeling. At the same time I stay close to my faith and am reminded that no matter what, God is always good and He is the author of my life and that comforts me. It makes me feel ok that I can not control the outcome.

Thanks to those who read this and continue to pray for me. We appreciate the love and support.

One thought on “Still Uncertain” 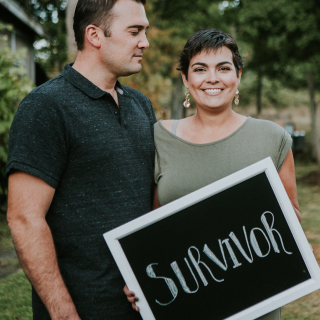 I have been through my fair share of trials in my life. I plan on using the trials I have been through to encourage those who need it. Writing seems to be a good way for me to express myself, to share my love of Christ, and to be real. I am a cancer survivor, a wife and mom to 4 awesome kids. Life is never easy but how you choose to live it can make all the difference.

Becoming the best you

The One And Allie

An Authentic Autobiography & Journey to the One & Allie

Being Real , Encouraging Others

Joshua 1:9 Have I not commanded you? Be strong and courageous. Do not be afraid; do not be discouraged, for the LORD your God will be with you wherever you go."